A Chamber Member in the New Year’s Parade

Sponsoring a float in the Tournament of Roses Parade has incalculable rewards, said Gloria Preciado at City of Hope.

The world-renowned cancer research and treatment organization based in Duarte is the only member of the Arcadia Chamber of Commerce this year to enter a float — one of 43 that will roll down Colorado Boulevard before a million spectators and an expected worldwide TV audience of 65 million viewers. 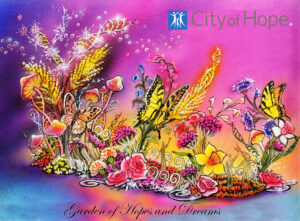 An artist rendering of City of Hope’s 2022 Rose Parade float.

As City of Hope’s Associate VP for Events and Visitor Services, Ms. Preciado has a firm grip on the giant operation.

The work takes hundreds of hours and involves scores of employees, patients and families, but it all pays off with a lift in spirits that money can’t buy.

“When you go out there on parade day, and you see how much joy you’re bringing to so many people, it’s a completely unique experience,” she said.

The cancer organization’s 50-foot-long 2022 float, entitled “Garden of Hopes and Dreams,” was constructed — and is now being decorated — at the cavernous Phoenix Decorating Co. building in Irwindale, which is less than five miles from the hospital.

That proves to be handy, said Phoenix Decorating Co. Sponsor Relations Director Chuck Hayes. “Our designers go over there to wander around the gardens and soak up the atmosphere,” he said. City of Hope is actually the closest sponsor to the Phoenix Decorating float factory, he added.

Ms. Preciado said City of Hope began entering floats in the parade in 1973. The event famously dates back to the19th century and is deeply woven into the fabric of the San Gabriel Valley – indeed, of Americana.

“I have lived in Washington D.C. and Boston, and we all saw it on TV,” she said. “When I got here, I didn’t know anything about parades or floats or any of that.”

Now, she steers a team that begins working on the next parade almost as soon as the dust settles from the last one.

“We get started in January, working on the theme, meeting with the float builders and looking over sketches,” she said.

Her team in the Marketing and Communications Department picks three of the sketches and takes them to City of Hope executives for a final decision.

“Our theme this year was hope and transformation,” Ms. Preciado said. 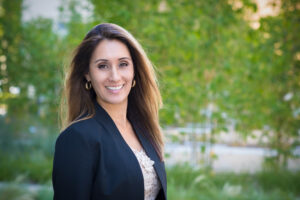 This year’s float includes three giant animated butterflies that symbolize hope and transformation and giant mushrooms that symbolize rebirth after a chaotic time, a metaphor for the battle against cancer that each patient must wage. There’s room on the float for nine the patients to ride along as the float makes its way down Colorado Boulevard.

Hayes said that fabrication of the floats is handled by the crews employed by Phoenix up until the first weekend of December, when volunteers swarm the barn to apply dry ingredients – grasses, barks, leaves, fronds and the like.

The week after Christmas when fresh flowers and perishable material are applied is always the most intense – and, participants assure you – the most fun.

“We put out a call to all employees to come help decorate the float,” Ms. Preciado said. The City of Hope group of reliable volunteers includes participants from every department, including physicians, nurses and lab workers alongside patients and their families – an average of about 450 people each year. 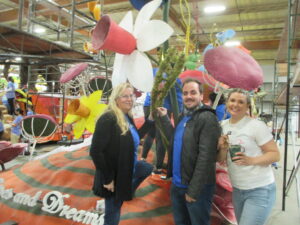 City of Hope employee Brandee Norton, right, works on the float alongside volunteers Andrea Mafit of Santa Ana and Marc Lalague of Newport Beach at the Phoenix Decorating Co. plant in Irwindale.

On a recent Saturday out at the float barn, Brandee Norton, a physician relations liaison with City of Hope Orange County, dabbed glue on a giant mushroom as her co-workers from various departments swarmed the structure applying dry material.

“I’ve never done this before,” Ms. Norton said. “It’s pretty sticky, but it’s actually really fun. I had no idea this kind of thing goes on.”

“It’s something that really captures the whole feeling of the institution,” Ms. Preciado said. On parade day, almost every television in patient rooms and around the hospital is tuned to the parade coverage so everybody on the campus can share in the experience.

Float sponsorship, of course, is measured in many ways – some large businesses write a check and let the float builders do the work for them, while communities like Sierra Madre and South Pasadena build their own floats, relying on volunteers and fundraising activities like live auctions and bake sales. Tournament Communications Director Candy Carlson said the City of Arcadia last sponsored a float in 2003.

As for City of Hope, Ms. Preciado said the feedback every year from former patients and their families is worth the effort in every way.

A greenhorn rookie seven years ago, now a veteran of America’s New Year’s Day celebration, Ms. Preciado is sometimes one of the savvy veterans that Tournament of Roses officials call on to go to Pasadena and address potential float sponsors on what they can expect, and what will be expected of them.

“I tell them first, it’s important to have a theme, to know what story they want to tell,” she said.
“Then I talk about how they have to have strong team perspective – teamwork in their organization, with the float builders and the Tournament.”

“But most important, they need to have fun,” she said. “This is such a unique event. It’s so joyful and dazzling. You go out there and see so many people and you’re bringing them such joy and happiness. There’s really nothing like this in the whole world.”