Magic happens at the Bookstore with Daniel Perez

Magic Happens at the Bookstore!

Magic is stepping into the spotlight again at a local bookstore, with a new magic lecture titled, “Conjuring  Cabaret with Cabernet.”

Local Highland Park bookstore owner, Jen Hitchcock could not be more delighted.  Her bookstore, on the corner of Figueroa and N Ave 55, called Book Show, has been around for two years.  While clients talk about the different events coming up, most often they talk about the magic acts and lectures.  The Women’s Magic Association (WMA) has regularly strutted their stuff in sold out shows and magic lectures, and tradition continued with former Magic Castle Magician, Daniel Perez’s highly anticipated event. 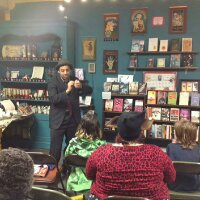 Magic first became a part of the Book Show experience with the WMA performances, which originated with a simple talk with Angela Sanchez, a brilliant magic historian, lecturer, and magician.  Jen recalls, “Angela came in, did a writing night, and was chatting with me about being a magician and talked about the Women’s Magic Association. She followed up and we got some shows going.” These shows were featured, and quickly sold out, and for good reason.  Be it a wonderful lecture describing the female presence and performers of magic in the 19th and 20th centuries, or performance shows with the WMA, featuring corporate performer, Kayla Drescher or the Mystiki Duo, one thing is certain, their next big show is not to be missed.  Int eh meantime, a new addition is garnering some attention, as well.

Professional record-holding magician, Daniel Perez has been busy doing corporate and private events across LA., and in his free time, he wanted to give back to the community through an event called, “Conjuring Cabaret with Cabernet,” which he sums up as, “Wine, Fun, and Magic.” A 9o-minute packed lecture full of easy ice breaking magic you can perform before the lecture is over, lots of wine, and learn 2-3 bar bets (a trick or stunt used to earn a free drink) that you can share with your fellow friends and acquantainces.  The next one is on May 12th, at 8 pm, at the Book Show, so be sure not to miss out!