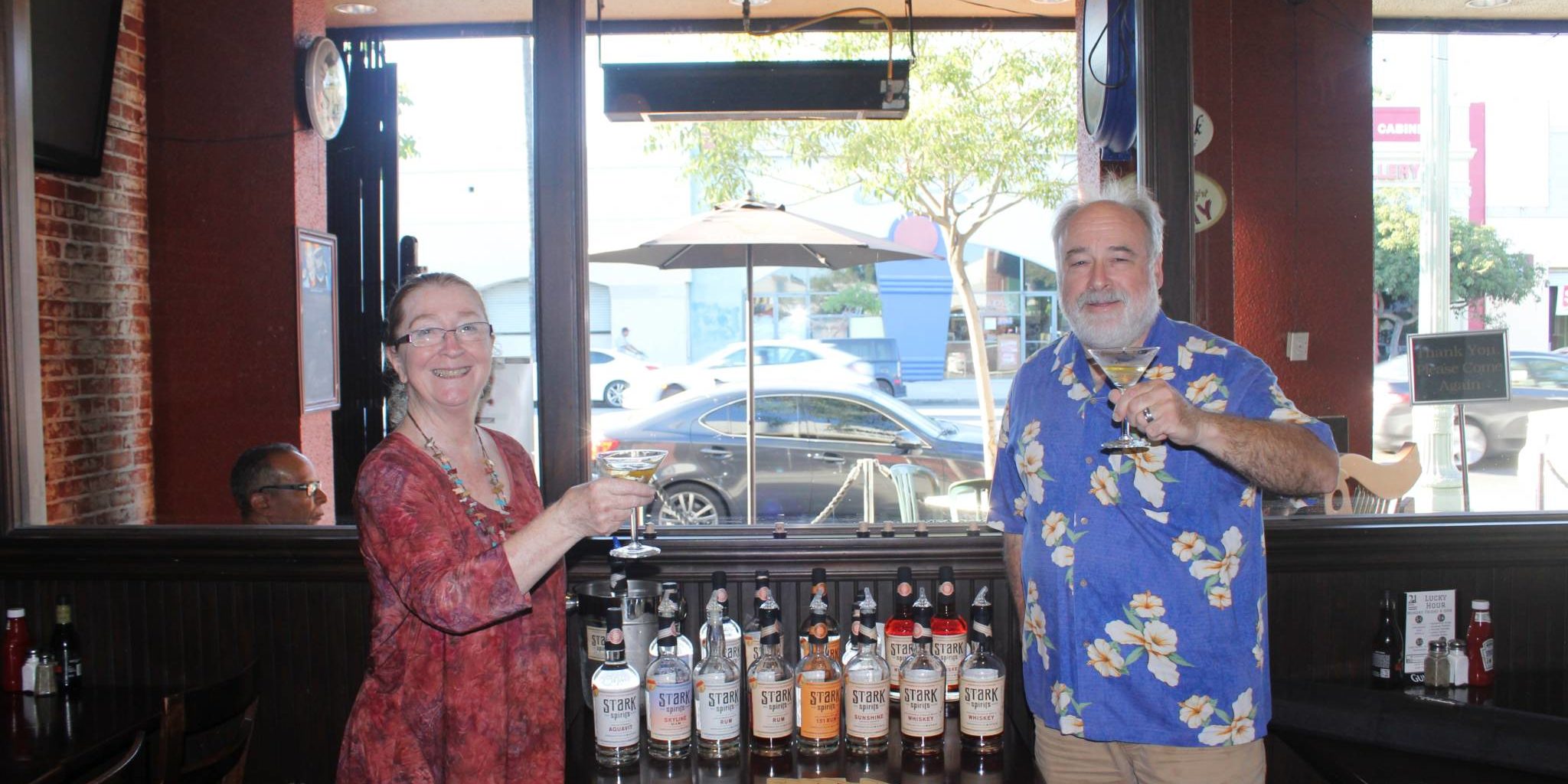 Stark Spirits was hosted by the LA Scotch Club Tuesday night, June 27. It was held at Lucky Baldwin’s Trappiste Pub and Café on Colorado near Allen Avenue, one of the three Luck Baldwin Pubs owned by Patty Simonian in Pasadena and Sierra Madre. The evening was a tongue-in-cheek “grand opening” for Stark Spirits, organized by Andy Smith, the guiding spirit of the LA Scotch Club.  Greg and Karen, owner-distillers of Stark Spirits in Pasadena, have been members of the LA Scotch Club for quite a few years. They were being teased for doing business more than two years without ever having had a grand opening event.  It was worth the wait! 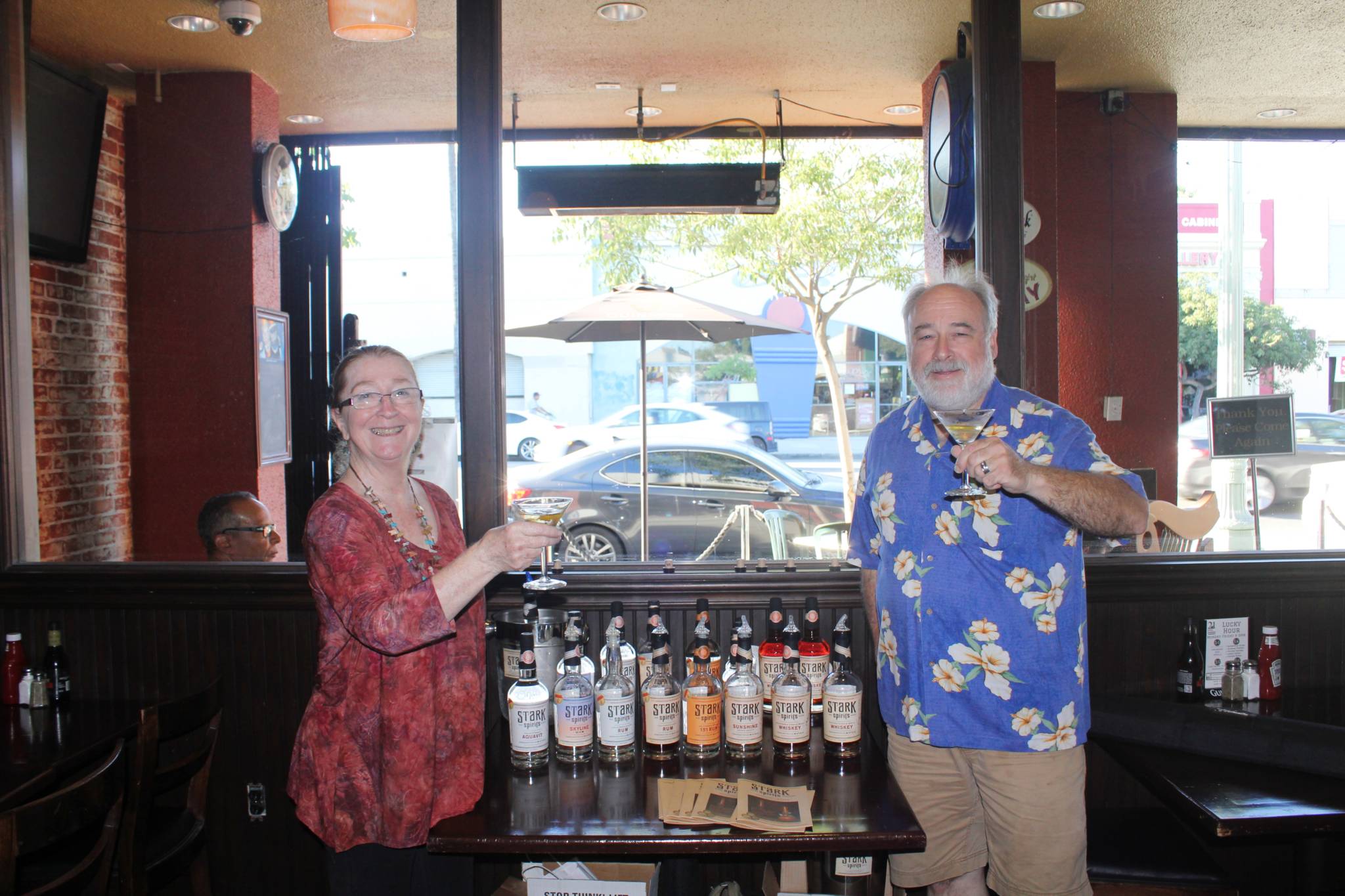 Steve Pritchard, general manager and chief bartender at Lucky Baldwin’s Trappiste Pub, created the Vestark cocktail for the occasion, featuring Skyline Gin.  The 30 or so members of the club who attended received a complimentary serving of the updated James Bond Vesper martini as they arrived.  A wide array of hearty appetizers followed, and then the Stark Spirits sampling began in earnest. The attendees were offered samples of the product line.  While the servings were being poured, Karen and Greg visited the tables to describe and discuss the spirits guests tasted.

LA Scotch Club members’ favorite spirit beverage is, of course, whiskey, but they enjoyed the change of routine that Stark Spirits provided.  Aquavit, gin, and three kinds of rum were offered for sampling during the hors d’oeuvres, which covered a lengthy time period.  Then dinner was served, a Lucky Baldwin’s specialty, fish and chips, followed by a Lambic beer sundae for desert.  The service and the food were excellent!

After dinner the drinks the Scotch club eagerly awaited were served to great acclaim: Stark Spirits California Single Malt Whiskey and Stark Spirits Peated Single Malt Whiskey.  Both whiskeys were admired and praised fully.  However, there was more– Stark Spirits’ signature Sunshine orange brandy was the final pour.  For some it was the first time, and in all cases it was highly acclaimed.  Karen and Greg were gratified by the critical praise given to all of their products by so many knowledgeable spirits aficionados.

Many attendees wanted information for buying Stark Spirits products.  Greg and Karen were happy to refer them to Pasadena area retailers, as they always do, and to direct them to their website, www.starkspirits.com, for a zip code search list of retailers elsewhere.  The Starks also were glad to receive the support of Lucky Baldwin’s, a Pasadena institution.  Stark Spirits is all about building community in the Los Angeles area and bringing goodwill to Pasadena.  There was lots of that at their “grand opening!”