The Arcadia Festival of Bands has grown to be one of the premiere band reviews in Southern California and is the longest-running event of its kind in the whole state. This sustained success is due to the continued support provided by the City of Arcadia, the Fire and Police Departments, the Arcadia Unified School District and local businesses. The parade simply would not happen without their cooperation. 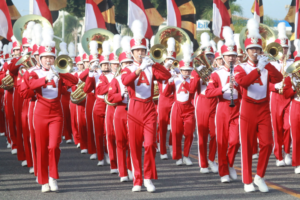 The all-day event consists of the Band Review starting at 9 a.m. on Duarte Road, east of Holly Ave., with the Dignitary Parade leading off at 8:40 a.m. The Percussion Festival starts at 11:40 a.m. at Salter Stadium at Arcadia High School followed by the Band Review Awards Ceremony at 2:00 p.m.

The evening field tournament is the 6A Division Field Show Championship for the Southern California School Band and Orchestra Association (SCSBOA). Currently scheduled to start at 5 p.m. at Citrus College in Glendora, CA followed by the Awards Ceremony at 8:30 p.m.

“The Arcadia community has always been a strong supporter of the school’s music program. They recognize the way music strengthens the lives of their children,” said Kevin Sherrill, Band and Percussion Director at Arcadia High School. “The Festival of Bands is a way for the participating bands and their families to celebrate the positive impact of music in all our lives.” 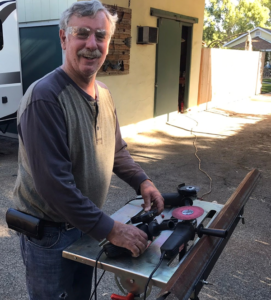 This year’s parade Grand Marshal is John Tallon. John, aka “Water Boy,” began his Arcadia music volunteerism in 1996 at Dana Middle School where he was soon club President. John followed his children, Brad and Kelsey, to the high school and was quickly wearing a Pit Crew hat, which he often wears today. As you fellow pit crew volunteers know, endless instruments are loaded and off-loaded onto trucks and carts. When John saw a cart that didn’t quite fit all the pit
instruments, he used his welding skills to make customized modifications to maximize their value. John towed many trailers and often drove his motorhome to events, providing a quiet place for the directors and staff. He carted water on his motorcycle, in golf carts, and in the back of his truck, keeping the band hydrated on campus, at Music Camp, and on the road.

John displayed his dedicated service by driving percussion equipment to Dayton, OH for the WGI National Percussion Competition in three recent seasons. When the Arcadia High School band connected with the Apache Nation in Cibecue, Arizona, just before Christmas John drove a truck loaded with jackets and other clothing to be distributed to the tribe. He soon started collecting bikes Arcadia students had outgrown, repaired them, and took them along with the clothes to the Student Council Apache Commission. 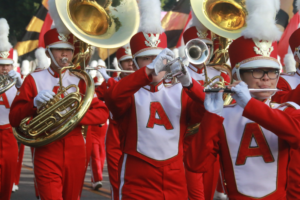 For the annual Music Camp in Idyllwild in August, John organized transportation for the endless instruments and equipment needed for the Band, Orchestra, Color Guard, and Choir. He towed golf carts, repaired and maintained the trailers, and replaced flat tires. Festival of Bands found him getting electricity to remote places as needed, organizing parking lots, and generally solving whatever problems occurred. Arriving back on campus, he got busy finishing props for competitions. For his last welding project, John took a week off work and made 1,700 welds on a third of a mile of metal.

It’s been 17 years since John had a child in the music program and 26 years since he started volunteering with the Arcadia music programs, but he is far from finished. When asked why he’s so dedicated to the Arcadia music program, John offered this perspective: “The band experience had such a positive impact on the character-building of our children. Band is more than just band. Team building, problem-solving, discipline, and creative thinking were all important parts of the experience.” We salute John Tallon and all of you who do so much to make our music programs such valuable places for our children. 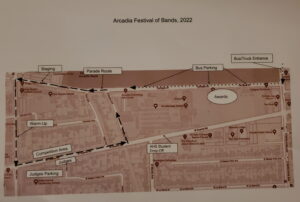 City of Arcadia presents Merry and Bright 2023 – Spend in Arcadia and get Gift Cards (see flyer for details)
December 1, 2022

Coronavirus Telebriefings for the week of November 29th
November 23, 2022