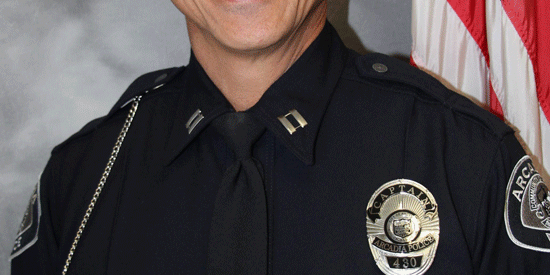 “We appreciate all those who have risen to the call of service as Arcadia Police Chief,” said Mayor Roger Chandler. “Captain Nakamura continues in the long line of excellence in law enforcement leadership that this community has come to expect and enjoy from its Police Department.”Captain Nakamura began his career with the Arcadia Police Department in 1992 as a Police Officer. As an Officer, he was assigned to Patrol and worked as a Field Training Officer, as well as being assigned to the Detective Bureau. As Detective, he was assigned to the Forgery and Fraud Unit and completed his Detective Bureau assignment in the Crimes Against Persons Unit. He was promoted to Sergeant in 2002 and worked as a Field Supervisor until he was transferred to Personnel and Training. In 2009, Captain Nakamura was promoted to Lieutenant, working various assignments under the Operations and Administration Divisions within the Department, including Watch Commander, Detective Bureau Commander, Field Training Officers Program Commander, and Force Training Unit Commander. In 2019, he was promoted to Captain. He holds a Bachelor of Science degree from Cal Poly Pomona, and is married with four grown children and a grandson.

“Roy is exceptionally qualified to lead the Arcadia Police Department,” said City Manager Dominic Lazzaretto. “Over the years I have known him, I have seen that Roy is conscientious, progressive, and dedicated to keeping Arcadia safe,” he added. “I am honored to be named the next Police Chief for the City of Arcadia,” said Captain Nakamura.

With his appointment, Captain Nakamura will become Arcadia’s 30th Police Chief and its first of Asian-American descent. He will assume command on January 9, 2021. For more information about the Arcadia Police Department, please visit ArcadiaCA.gov/police.

Nestled along the rolling foothills of the San Gabriel Mountains and Angeles National Forest, Arcadia is a charming, family-oriented community with a population of just over 57,000. Located only 13 miles east from downtown Los Angeles, regional transportation networks like the Metro Gold Line connect Arcadia as a premier residential, shopping, and entertainment destination in the San Gabriel Valley. Arcadia is known for its top-rated schools, iconic landmarks, and serene neighborhoods. Arcadia is an award-winning community having been twice named as the Best City in California in which to Raise Kids and the 2017 Most Business Friendly City in Los Angeles County. With the conveniences and amenities of a full-service, mid-size city, Arcadia’s “Community of Homes” provides a quality of life that will go Above & Beyond your expectations.

Free Bouquet When You Spend $30 or More – This Weekend Only at Grocery Outlet Live Oak
May 7, 2021