ARCADIA RECEIVED THE GIFT OF CROWDS by Michael Lucas

Behind the scenes: How technology mesmerizes viewers

Arcadia proved one of the Southland’s premier destinations during the holiday season, with two sprawling light-and-music shows drawing thousands of visitors eager to soak up the festive atmosphere. 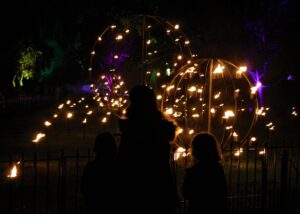 “Lightscape” at the County Arboretum and “Reindeer Road” at Santa Anita Park drew crowds to town almost every night during the holidays – and it looks like they’ll return next year to the neighboring destinations – both members of the Arcadia Chamber of Commerce.

Santa Anita Park Special Events Manager Pete Siberell said negotiations were under way with the producers of “Reindeer Road,” Tempe-Ariz.-based World of Illumination, to return next season. A spokesman for the Arizona group said they were hoping to reprise the drive-through show in the race track parking lot.

Siberell said the show, which ended Jan. 2, attracted more than 12,000 cars, and the producers are hoping to pull in more next year.

“It’s a great show for the families with kids,” Siberell said.

Across the street at the Los Angeles County Arboretum, “Lightscape,” produced by U.K.-based Culture Creative, attracted festive throngs, with some nights selling out 6,000 ticket.

The impact of the two shows on the local economy hasn’t been bottom-lined, but rave reviews abound.

At Westfield Santa Anita, within walking distance of both venues, marketing director Debbie Oung said crowds from the shows flocked to the mall’s stores and eateries. 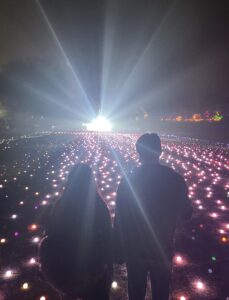 “Lightscape” visitors are engulfed by the “Sea of Light,” the grand finale of the holiday show that concludes Jan. 16 at the Los Angeles County Arboretum.

“We definitely noticed customers from outside our trade area,” she said. “We’d be thrilled to welcome them back.”

“We got some of the spillover too,” he said. “People went to the shows, then headed to our restaurants on Myrtle Avenue. Any time we have something that draws people to town, it’s great for everybody.”

As for the exact amount spent by the out-of-town guests, nobody has come up with firm data, but Nancy Yoshihara, the Arboretum’s communications director, said it would be a ripe field of study for, say graduate business students. “That’s something that somebody might want to work on,” she said.

Tim Schwehr, the City of Arcadia’s senior economic development analyst, cited one recent study that found individuals who attend horse races at Santa Anita will spend, on average, an additional $25 to $50 elsewhere in town on each visit.

As for major Southland seasonal events, the two shows definitely put Arcadia on the upward curve.

Arboretum CEO Richard Schulhof, a former Chamber Board member, said the “Lightscape” collaboration “brings creativity from around the world, while celebrating the unique gardens and history at the Arboretum.

“We look forward to seeing the show evolve in exciting new ways in future years,” he said.

“Lightscape,” which runs through Jan. 16, comprises 17 art installations, many of them indeed mesmerizing: singing trees, disco robots, a fire garden of oversized candles and an acre of colorful lights evoking the experience of walking along a fanciful, color-washed seashore, to name just a few.

The producer for Culture Creative, Marc Rosenthal, a lighting designer and show-control-system specialist,  said the Arboretum show is an offshoot of holiday shows that began 15 years ago at the vast 330-acre Kew Gardens, the Royal Botanic Gardens at Richmond, southwest London.

The concept has grown to include 23 shows around the world, including five in the United States – the others are in Houston, San Antonio, Chicago and Brooklyn, New York. The original was presented this past season at Kew Gardens as “Glow Wild.”

Rosenthal said planning began nearly a year ago when senior producers from London flew out to walk the grounds with Arboretum officials.

Workers also launched a boat to provide the effects in the lake and set up a shop to manufacture 300 oversized fire garden candles for every night of the show.

One of the key challenges was working around the flora and fauna, said Rosenthal, who has put on large shows at theme parks and major events worldwide – for instance, at the 2007 Super Bowl, and a number of Burning Man festivals in Nevada.

“A lot of us are involved in event production where we walk in, take over and set up, pour concrete, put everything where we want and it looks gorgeous and we go home,” he said.

“But this is a different situation. Here we have peacocks, we have geese, we have a boat and have to make sure it’s okay with the turtles. We have plants where we can’t put our pipes just anywhere,” he said.

“My responsibility is to maintain the sacredness of this Arboretum,” he said. “We had a problem with ants. Well, we just can’t kill the ants, we have to work with them and persuade them to go over there for a while. They live here, this is their place and we just have to work with that.”

Rosenthal said he and the other artists are already brainstorming for next year’s show – assuming it will carry on.

“It’s been such a wonderful experience, it would be great to have more of it,” he said.

Options for Learning Honored by Sen. Susan Rubio as a Nonprofit of the Year
July 5, 2022