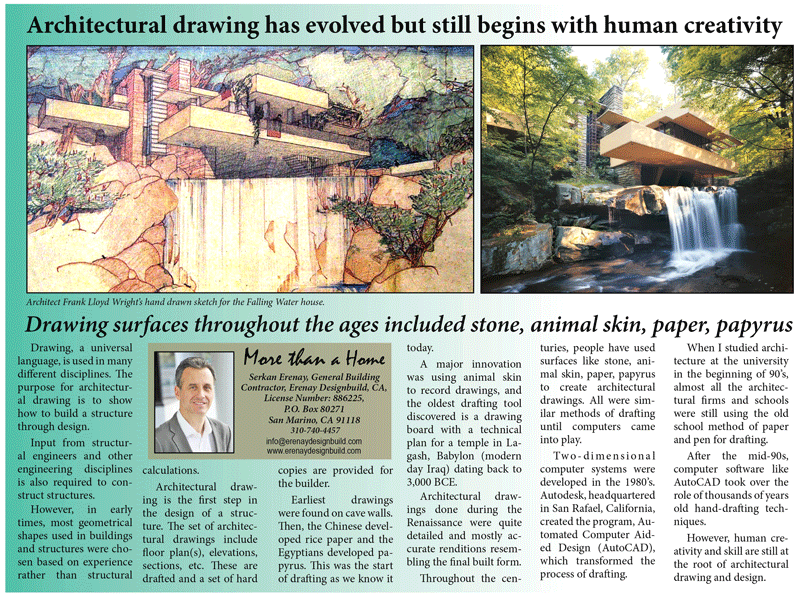 The Evolution of Architectural Drawing Over the Years

Drawing, a universal language, is used in many different disciplines.

The purpose for architectural drawing is to show how to build a structure through design. Input from structural engineers and other engineering disciplines is also required to construct structures.

However, in early times, most geometrical shapes used in buildings and structures were chosen based on experience rather than structural calculations.

Architectural drawing is the first step in the design of a structure.

The set of architectural drawings include floor plan(s), elevations, sections etc. These are drafted and a set of hard copies are provided for the builder.

Earliest drawings were found on cave walls.  Then, the Chinese developed rice paper and the Egyptians developed papyrus. This was the start of drafting as we know it today. A major innovation was using animal skin to record drawings, and the oldest drafting tool discovered is a drawing board with a technical plan for a temple in Lagash, Babylon (modern day

Architectural drawings done during the Renaissance were quite detailed and mostly accurate renditions resembling the final built form.

Throughout the centuries, people have used surfaces like stone, animal skin, paper, papyrus to create architectural drawings. All were similarities methods of drafting until computers came into play.

When I studied architecture at the university in the beginning of 90’s, almost all the architectural firms and schools were still using the old school method of paper and pen for drafting. After the mid-90s, computer software like AutoCAD took over the role of thousands of years old hand-drafting techniques. However, human creativity and skill are still at the root of architectural drawing and design.

Arcadia Recreation and Community Senior Services Virtual May Presentations
May 11, 2021

This Week’s Coronavirus Telebriefings
May 10, 2021