Haunts, History and Chit-Chat at Breakfast 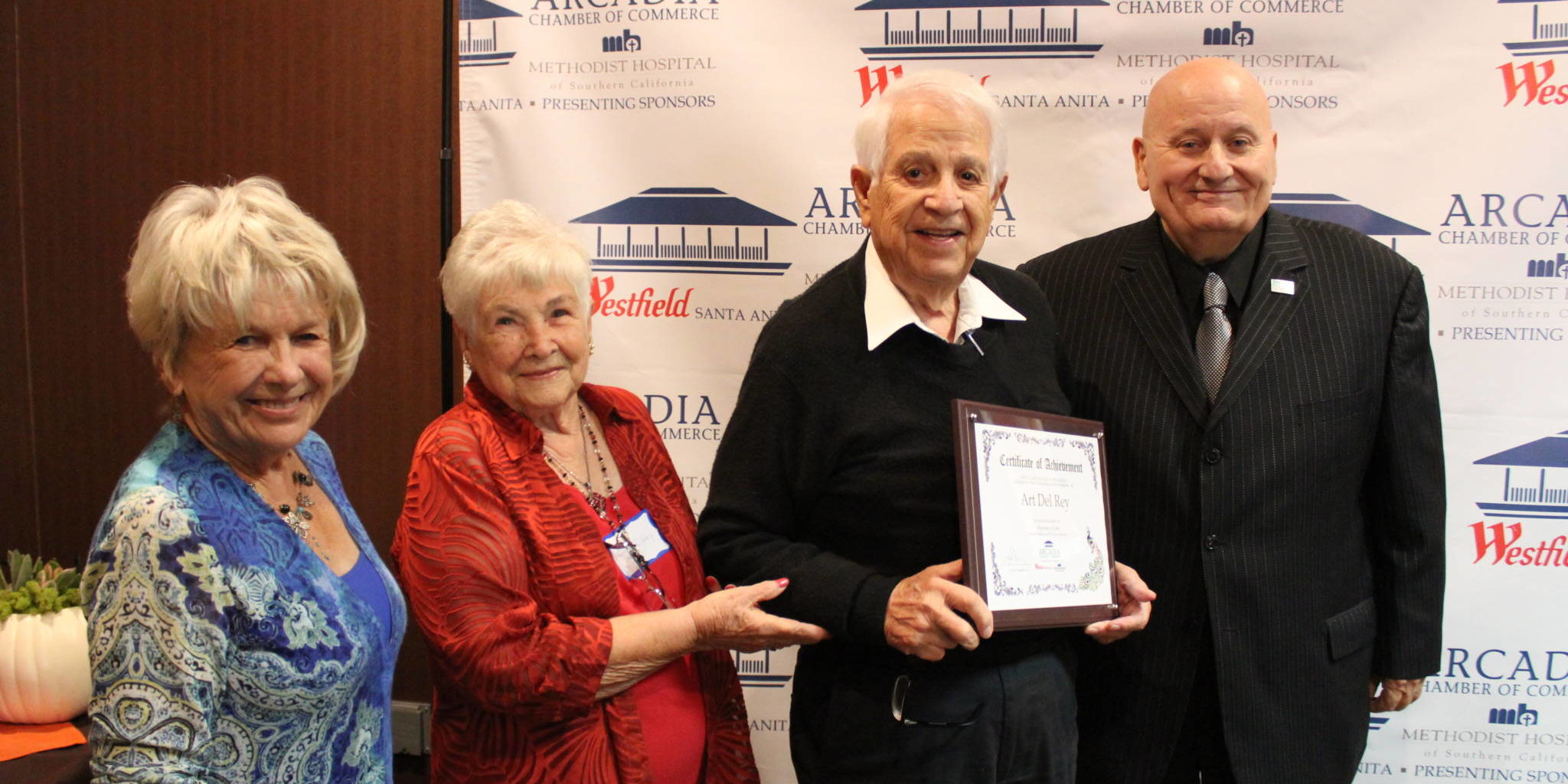 This morning the Arcadia Chamber of Commerce participated with Breakfast Sponsor, Rose Hills Memorial Park and Mortuaries, as well as breakfast host Courtyard by Marriott to bring the festivities for this month’s Spooky October Breakfast. Although the weather is currently more akin to summer, the decor of this morning’s Networking Breakfast showed off Courtyard’s spooky spirit. The inviting fall ambiance was heightened with the addition of festive pumpkin centerpieces, fall leaves and a Frankenstein themed server. Courtyard provided a classic breakfast which included; eggs, bacon, sausage, eggs Benedict, french toast, home fries, and fruit. October Networking Breakfast also featured a short presentation from Networking Breakfast Sponsor, Rose Hills Memorial Park and Mortuaries, the Arcadia Historical Society was given a moment to recognize Business Icon Art Del Rey, and the festivities wrapped up with Talk Time, a round of Testimonials and a Raffle of goods. 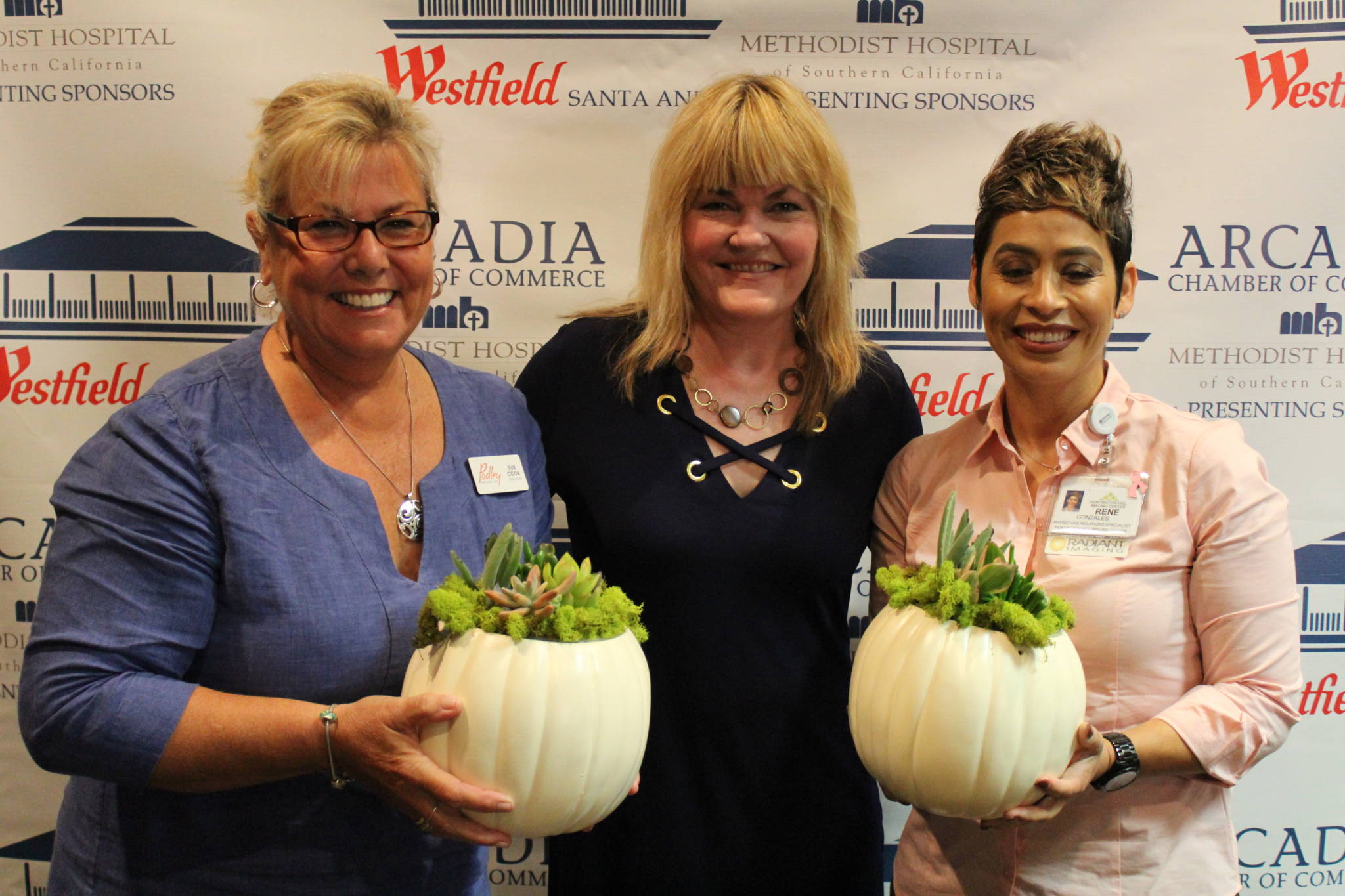 Many chamber businesses are gearing up for a busy Fall with upcoming events and fundraisers. Francine Chiu and the Arcadia Chinese Association will be hosting “Unconditional Love,” a Wine and Tea tasting fundraiser in support of domestic violence victims. The event will occur on October 29, 2017 at the Arcadia Community Center and is teaming up with many local Arcadia Chamber Members, proceeds to the fundraiser will benefit the Good Shepherd Shelter. Bev Street and Carol Libby will be celebrating the 65th birthday of the Arcadia Historical Society with their, “Mystery Dinner and Interrogation” event on November 12, 2017 at the Prince Erik Hall Gardens. Stefanie Shook mentioned their ongoing campaign, “Movers for Military,” this supports homeless veterans by providing basic needs for this at-risk group, you can find donation boxes in many local businesses, such as the Arcadia Chamber of Commerce, the event ends on November 13, 2017. Bringing back the notion of theatrics and what should now be viewed as an Arcadia Chamber Classic, Dr. Seth Mittleman, featured in the photo in full Phantom costume, brought the tenor back to a rendition of Phantom of the Opera.

Celebrating remembrance is a common factor in many cultures, and this truly shows at Rose Hills Memorial Park and Mortuaries in their Dia de Arte y Altares, which recognizes Dia de Los Muertos. 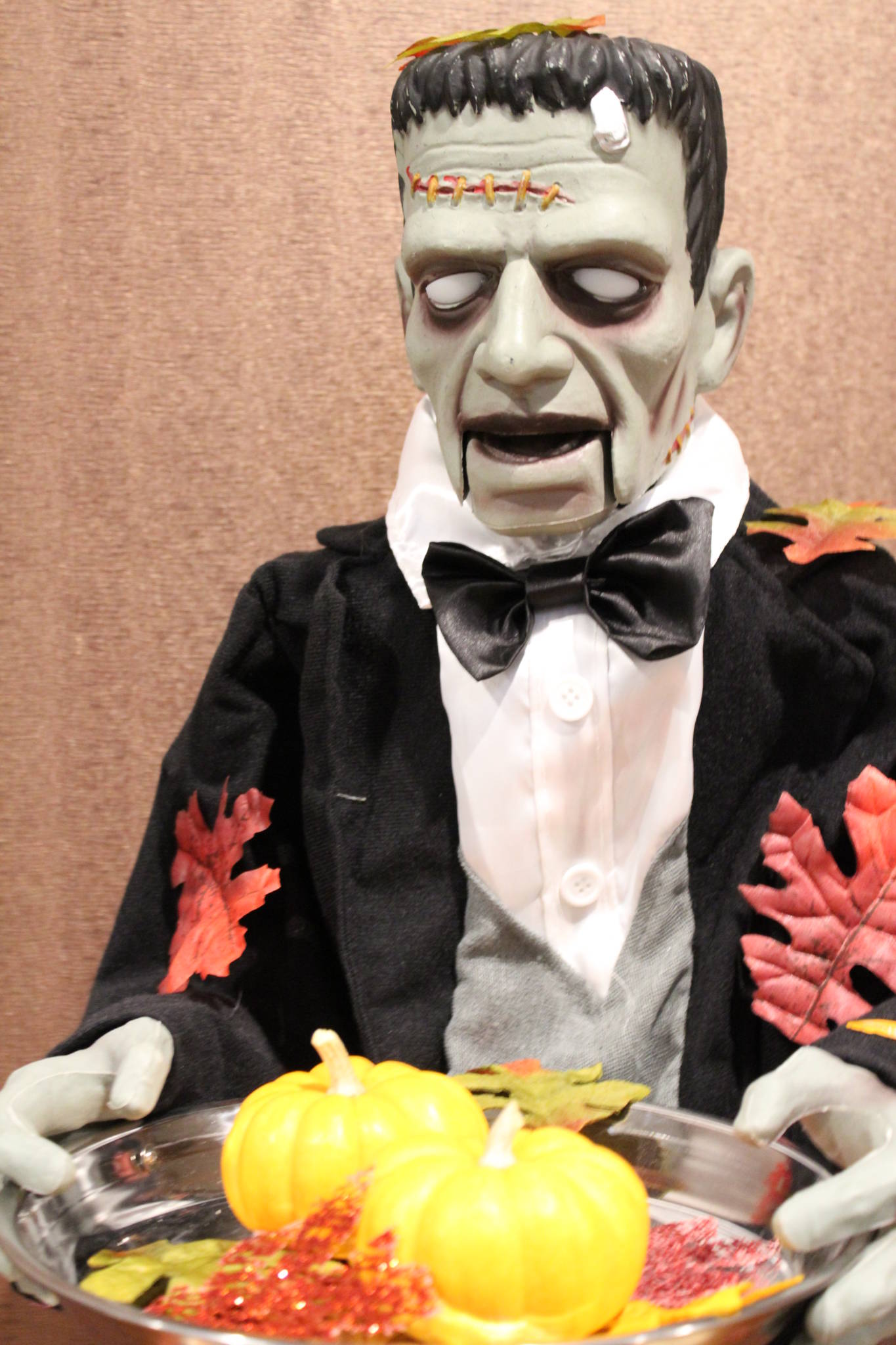 The Arcadia Historical Society and the Arcadia Chamber of Commerce presented Art Del Rey Realty with this month’s Business Icon Award, in recognition of his long service to the Arcadian Community. Art Del Rey was introduced by Gene Glasco, City Clerk of Arcadia. Gene mentioned that Art is a longtime Arcadian resident being born in November of 1923. He spent many of his early years as part of the air force during World War II. After the war Art joined his brothers working at a car dealership, and eventually establishing his own Real Estate Business, Art Del Rey Realty. After many years in the local community, Art became a pillar of Arcadia and eventually allowed his daughter, Pamela Del Rey to follow in his footsteps taking the reigns of Art Del Rey Realty. 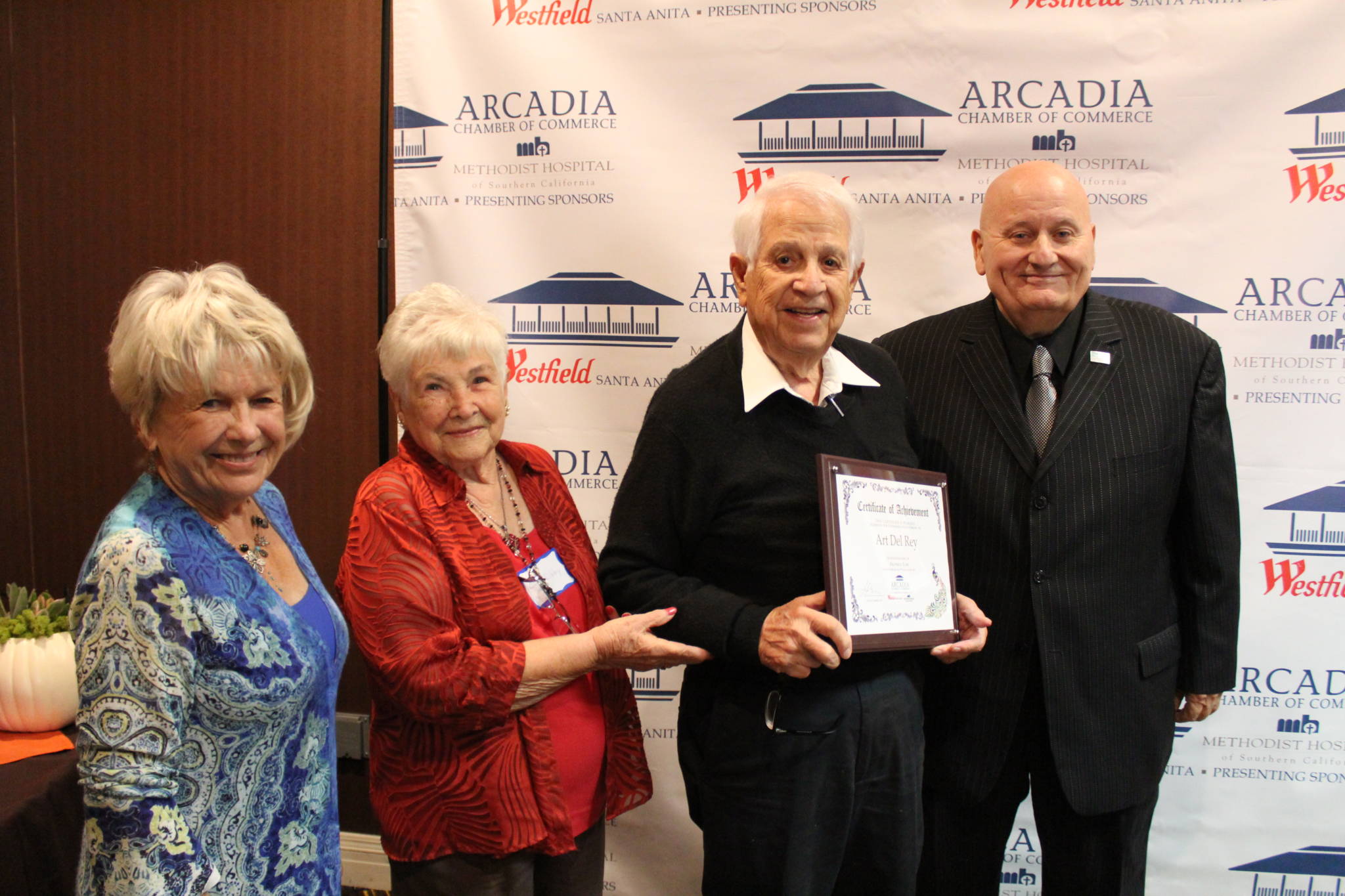 Joanne Bockian of STARS Athletics thanked Jennifer Stone of Imprintability for creating the best banner she has ever seen, in the exact shade of torquise that she asked for.

Sue Cooke of Podley Properties thanked Pamela and Art Del Rey of Art Del Rey Realty for helping Sue pick out the house that she lives in and the house her mother’s home.

Francine Chiu and the Arcadia Chinese Association thanked Rosa Jaime of the Four Seasons Tea Room for doing a last minute baby shower for her friend, which she was able to set up on Sunday, (A day when the Four Seasons is closed).

Patricia Colonello pf Mountain Views News thanked Rosa Jaime of the Four Seasons Tea Room for hosting a lovely patio tea, where Patricia and her husband stayed even after closing to chat.

Renee Concialdi of Right at Home thanked Sylvia Rosenberger of the Los Angeles County Arboretum and Botanical Gardens for having a one on one meeting and tour of the arboretum, a setting where Renee was able to learn much of the rich history of the arboretum.

Dr. Seth Mittleman of Chiropractic Health Center thanked the Arcadia Chamber of Commerce for hosting the Taste of Arcadia, an event which many people went to.

Tim Schwehr of the City of Arcadia thanked MJ Finstrom of HUTdogs for doing great work on constant contact ads and other promotions.

Rosa Jaime of the Four Seasons Tea Room thanked Jennifer Stone of Imprintability for making her pop up banner for Taste of Arcadia.

Donna Lee of LifeWave Arcadia thanked Manny Cabrera of Cabrera’s Mexican Cuisine for coming through for her catering and facilitating needs during a free pain relief demo. 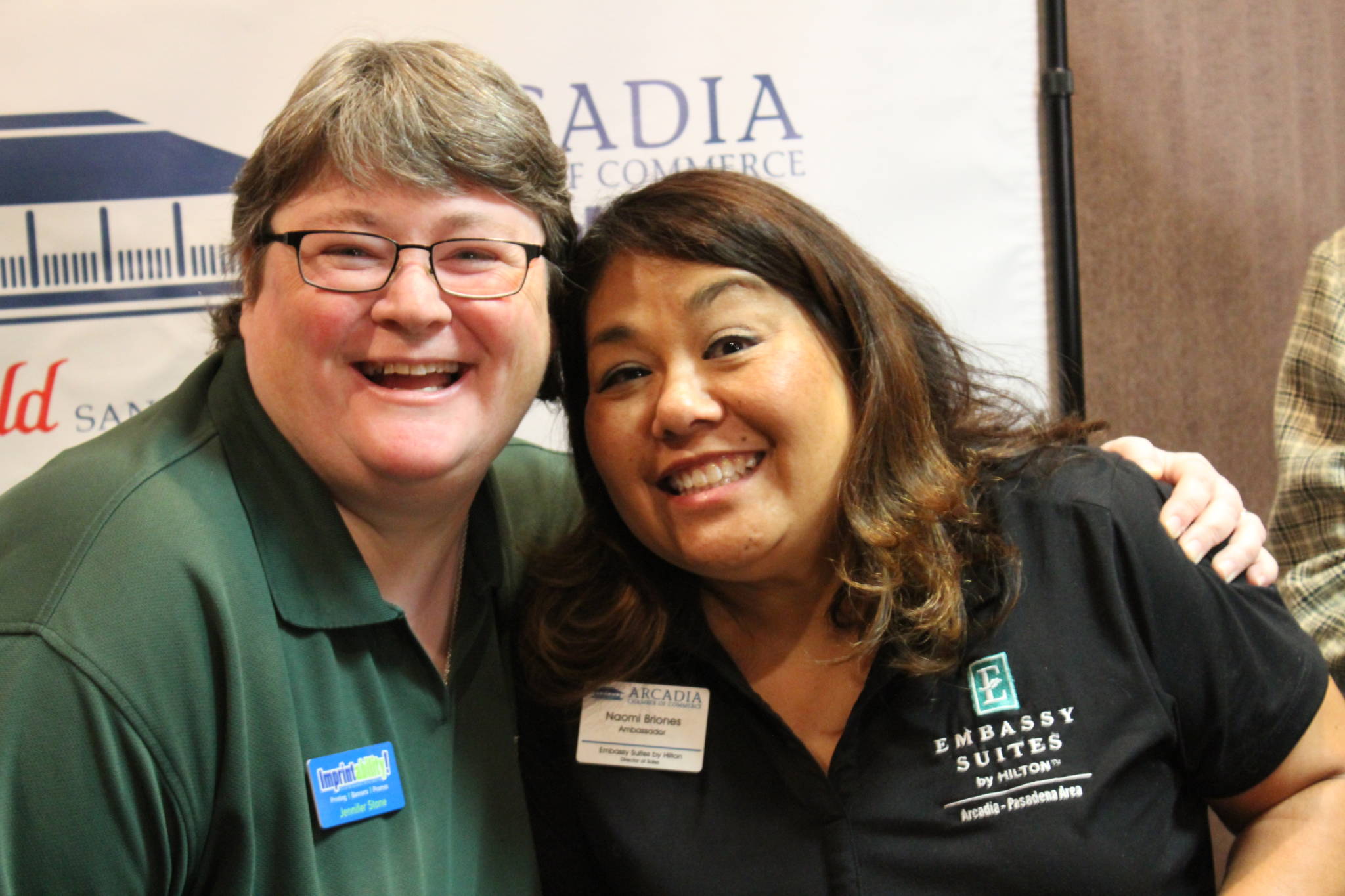 Bev Street donated two comp tickets to the 65th bash, which was won by Loretta Vigil.

Sue Cooke of Podley Properties donated a lovely bottle of wine, which was won by Bev Street of Arcadia Historical Society.

Cindy Dole of Storybook Styling donated a succulent decor, which was won by Sue Cooke and Rene Gonzalez

Darlene Papa of Lifeline for Pets donated a basket with cat mugs and Starbucks gift card which was won by Donna Lee.

Naomi Briones of Embassy Suites donated a $25 dollar gift card to the Peacock Grille, which was won by Luis Dega.

Jennifer Stone of Imprintability donated a gift card for 500 buisness cards to MJ Finstrom of HUTdogs.

Carmen Richardson of Via One Hope donated a bottle of One Hope Wine and a ticket to Tonight’s Pink Party, which was won by Mitch Salem of EH Financial Group, Inc. 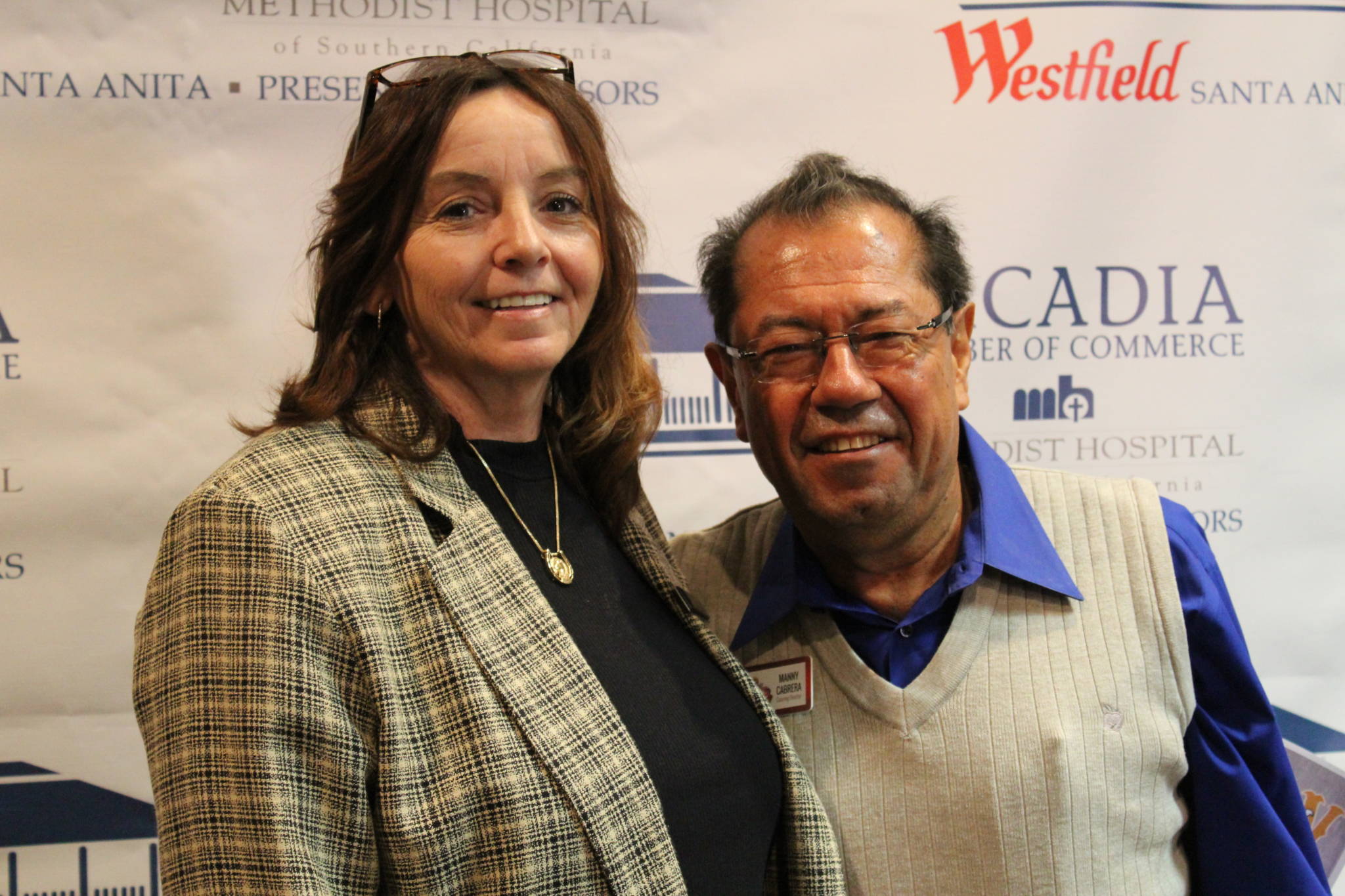 Sophia Chan of Monrovia Gardens donated a goody bag, which was won by Cindy Dole of Storybook Styling

Teri Muse of Waste Management donated a mini trash can with a $10 dollar gift card, which was won by Joanne Bockian

Gene Glasco of the City of Arcadia donated 2 tickets for dinner at their fundraiser, which was won by Tara Gadsby

Tong Ng of HSBC donated a white wine, which was won by Rene Gomez

Patricia Colonello of Mountain Views News donated a business card ad for one week, which was won by Cathy Felix Healthcare Partners