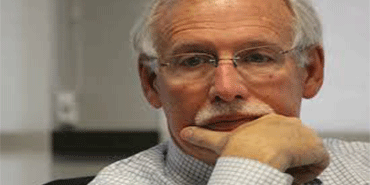 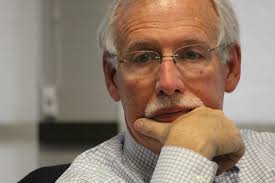 “I’ve been Mayor 5 ¼ times,” Gary Kovacic indicated with a tilted grin. Facing the full room at the Arcadia Chamber of Commerce’s Government Affairs Forum (April 7) led by Chairman Jack Orswell, the Mayor who has officially been in office longer than city founder Lucky Baldwin, delivered a historical perspective on the city in conjunction with his keen experience on City Council. Attendees sat alertly, bemused by the idea that this was Gary’s first time speaking about his personal outlook—both a lesson through time and a peek inside the mind of perhaps the most multifaceted citizen of Arcadia.

Gary is a native Arcadian who has overseen a centennial celebration, the completion of the Metro Gold Line, remodel of the police station, building of a new fire station headquarters, funding for the Arcadia Performing Arts Center, leading participation for the Mayor’s Breakfast and Arcadia High School 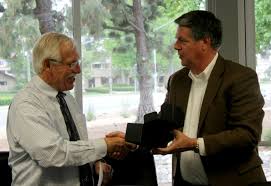 Constitution Team, edited two anthologies about Arcadia history, and most recently approving residential zoning regulations. Though he will be officially termed out of office next week, his legacy continues to course through the city due to his steady involvement and his steadfast “look to the West”—an aim at new beginnings with an appreciation of the past.

Forum attendees organized of city officials, legislative representatives, and citizens shared recent reports and insights on developments pertaining to their respective areas. Around the conference room table, announcements were presented regarding recipients of the Women of Distinction award, the development of county monuments, the adoption of zoning regulations, and local hotel remodels.

To view more of the event photos, please follow this link.

After promising to explain his fractioned term of office, Mayor Kovacic delved into his experiences, with each “chapter” in his narration introduced with an endearing anecdote. It was the centennial year celebration in 2003 that resulted in his 5 ¼ term, in which Council members took turns as acting Mayor and he had the honor of hosting the city’s birthday in August.

He transitioned his discussion into the long-awaited Metro Gold Line design since it was a “big deal” by reflecting upon the many years of careful planning that the city took to implement such an effective transportation program. The bridge design over the I-210 freeway, evocative of a basket weave and the underbelly of a snake, was first inspired by the native Tongva people, a revision made by the Mayor after the initial credit was given to the Channel Island Chumash. Always the history buff, he has established other allusions to heritage in the construction of city landmarks such as the illuminated bridge over Santa Anita Ave. labeled with a vintage designed sign and the Route 66 bridge over Second Ave. that was inspired by Glendora’s “Pride of the Foothills” (a motto he thinks Arcadia should rightfully adopt).

He further credited the construction and remodel projects under his terms of service to the funding backed by citizens. The police station with a state-of-the-art firing range and fire station headquarters complete with a “snore room” that he has exclusively tested, was only possible with the support of the community. The $20 million Arcadia Performing Arts Center, made possible with the passage of Measure I; and recently, Santa Anita Park‘s donation of a 1909 grand piano from their iconic Chandelier Room all demonstrate this community support. Public art projects, such as the new tapestry wall at the Arcadia Public Library with tiles illustrated with scenes of a “day in the life” within Arcadia and the restoration of the tile walls (once covered with stucco) at the City Hall featuring Arcadian history from the mission days up the 1950s were also realized under his care. Building upon the bygone momentum, he along with former Chamber CEO Scott Hettrick, has marked 10 historic spots within the city in order for any curious citizen to ponder upon—one even being located in front of the Chamber building.

An especially remarkable moment occurred in relation to the city’s beloved founder, a high point in his connection with heritage. One afternoon at The Arboretum, the great-great- great granddaughter of Lucky Baldwin approached Gary with the proposition to dedicate the statue located on Huntington. The family paid for its production and the city for the pedestal Lucky stands so prominently upon. “Dawn of the west,” an allusion to a destiny of continuous invention, is a motto that Gary reflects upon with noticeable regard.

In true dignified prose, Mayor Kovacic accredits everything that he accomplished to the encouragement of his family, who is accomplished in their own right. His wife Barbara is a personal financial assistant aiding senior citizens, his daughter Kelly was the 2010 National Teacher of the Year, and his son Casey is a public defender with an enthusiasm for golf that Gary personally contributes to as caddy. From the early days of Little League with his father in which he was instilled with the purpose of public service to the inspiration he draws from his active mother who participates in the city’s language immersion program, Gary is true Arcadian to the heart, valuing his upbringing and the appreciation it has emboldened in him today. Receiving the “good glass” from the Forum’s chairman Jack Orswell who delivered a touching ode to his service, attendees stood and applauded the Mayor both in appreciation for his public service and for being a dear friend to the city of Arcadia.

Reports from legislators and their representatives:

For more information on water conservation opportunities, please contact Sami Taylor at staylor@ArcadiaCA.gov or at (626) 256-6595.

The next Government Affairs Forum on May 5 at 8 a.m. will feature City of Arcadia Economic Development Analyst Tim Schwehr who will provide an exclusive sneak preview of what Arcadia will look like circa 2020 in regards to commercial activity.

The public is invited at 8 a.m. on the first Thursday of each month to hear informative presentations at the monthly Government Affairs Forum led by Chairman Jack Orswell fromOrswell & Kasman, Inc. Environmental Assessments & Consulting. The Forums are held at the Chamber office at 388 W. Huntington Drive in Arcadia in the Chamber’s conference room sponsored by Foothill Credit Union. RSVPs to the Arcadia Chamber of Commerce office are appreciated – (626) 447-2159 or info@ArcadiaCaChamber.org

Join us for a Week of Wine Tastings with Bella Sera and Lange Twins Winery
August 18, 2020