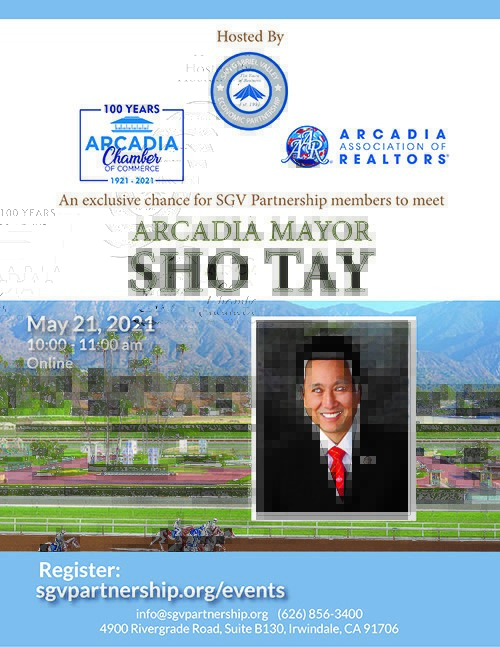 This event is organized by the San Gabriel Valley Economic Partnership, the Arcadia Chamber of Commerce, and the Arcadia Association of Realtors.

The meeting will take place via Zoom.

Sho was born in Taiwan and moved to Okinawa, Japan with his family when he was 15 years old. When Sho was 18, his family decided to move once more and settled in Alhambra. He graduated from Alhambra High School and went on to receive a B.S. degree from California State University, Los Angeles.

Due to his father’s sudden passing, Sho started his own business at the age of 19 to help support his family. He has since owned and operated several businesses. Aside from work, Sho also graduated from the Rio Hondo Police Academy and served as an Alhambra PD reserve.

Sho met his wife Sherry, a registered nurse, and together they settled in Arcadia in 1984 and started a family. Their two children are both graduates of Arcadia High School. For the past three decades, he and his family have made many friends in this city and continue to enjoy the life that they have made here.

As his children have grown into adulthood and with his businesses established, he has now devoted his time to philanthropy and community service. Serving on the City Council is just the latest in a long record of public service that he has pursued with charitable organizations and service organizations in Arcadia over the last decade. His hobbies include fishing, traveling, gardening, boating, collecting automobiles, and volunteering.