On Sunday, November 12th, the Arcadia Historical Society celebrated its 65th birthday with a Mystery Dinner at Prince Erik Hall. Based on a real murder case that occurred at a gas station that once existed on Foothill Blvd., guests had to choose the murder from a cast of characters, helped along by clues placed at each table.  In the real case, it was rumored that Charles Forbes and Marge Jones buried their loot from a heist in the San Gabriel Mountains above Arcadia.  Though the ‘treasure’ has not yet been found, residents continue to hunt for it. 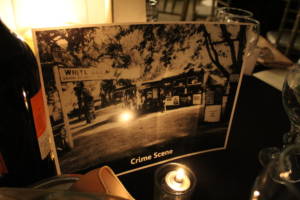 The evening began with photos in front of a vintage truck and being fingerprinted by volunteers dressed in ’20s garb.  Guests then entered the reception hall and enjoyed Vodka Fresca martinis, wine and appetizers while waiting for the evening to begin.  And it began with a bang, with an actor being ‘shot’ before guests were led to the dining area to be ‘interrogated’ about the crime.

Guests at each table read clues to help determine which character took part in the crime, and in the end the ‘murderer’ was the sharp shooting ‘Annie Oakley,’ playing by Kim Brink, who committed the crime at the request of ‘Lady B Goode,’ portrayed by City Councilwoman April Verlato, who was the ex-wife of the vicious killer, Charles Forbes.  In the end, all characters were involved in some sort of illicit activities. 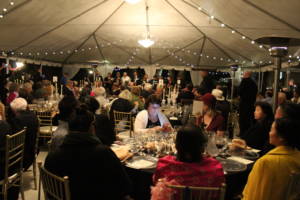 Arcadia Historian, Carol Libby researched the history of the event, with Sandi McQuilkin writing the script, and the cast of characters included local Arcadians. 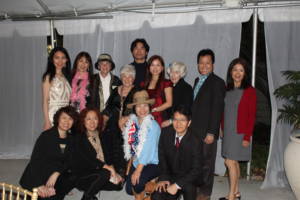 The night also honored the first recipient of the Carol Libby Youth Scholarship Award, given to an Arcadia High School student who not only showcased excellence in academics, but also an interest in the history of Arcadia.  Adrianna Togelang was on hand along with her family to accept.

The Heart of Mexico and the Spirit of Agave – Fiesta at Max’s is all about the Tequila – by Mike Lucas
September 23, 2021