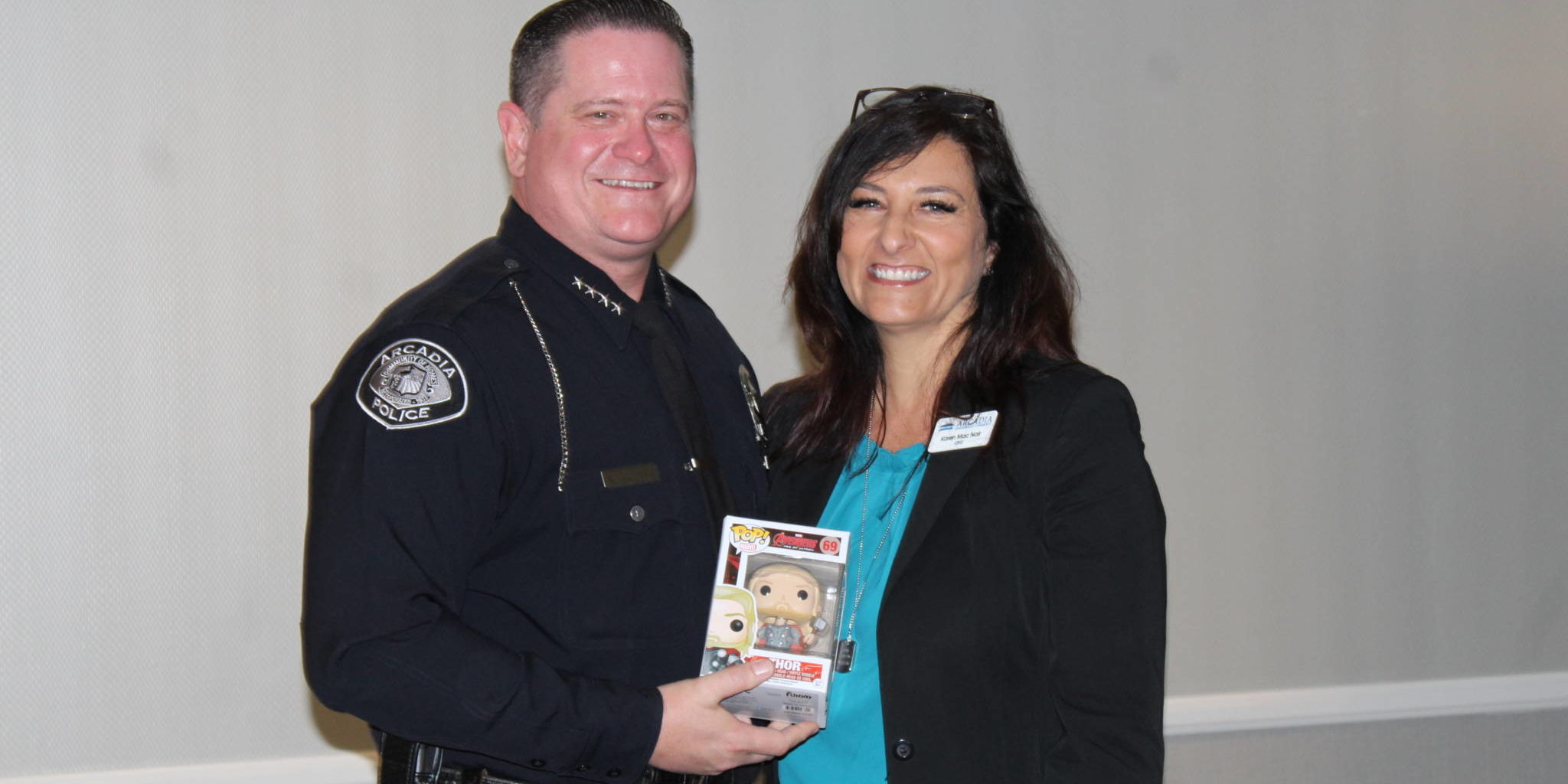 Homelessness and how it’s affected the business community was the topic that Arcadia Police Chief Robert T. Guthrie spoke on this morning at the Arcadia Chamber of Commerce’s May Community Connection Meeting. Because of the interests and support from the community this month’s forum was held at Embassy Suites by Hilton Arcadia to accommodate the larger audience.

Robert began his presentation by illustrating the characteristics typified by the homeless. Most homelessness is the result of mental health issues, substance abuse or healthcare issues. While at first the homeless had difficulties with mobility and transit, the opening of the metro gold line has made this a non-issue for them. Robert expressed that the access to transit has made it possible for the homeless to seek refuge in safer cities such as Arcadia in the morning and return to their domicile in the evening. Unfortunately overall Robert stated the fact that the homeless are a high risk community as victims and perpetrators. It’s reported that the homeless will suffer from abuse, assault and rape. As well on the other hand their is an increased possibility that they will also commit crimes. These crimes are commonly categorized as misdemeanors but have the potential to generate high property damage.

In relation to Arcadia demographics show that there was a count of 12 homeless people living in Arcadia in 2016, this number increased to 14 in 2017. Robert expressed that this number is associated with specifically the homeless people that would call Arcadia their residence.

When it comes to issues with the homeless the police have the responsibility to make sure that they can help keep the community safe, but also help when the homeless are victims of crimes. Robert expressed that there has been an increase in calls related to homeless. In 2017 the Arcadia Police Department reported 954 calls, this is double the volume of calls which were received in 2014. While there was a consistent increase from past years the Metro expansion to Arcadia occurred in 2016 which shows the biggest jump in homeless reports. 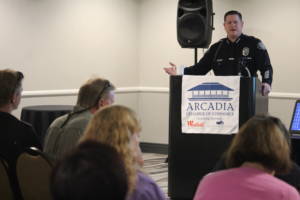 “If all of that has gotten us here, than what good was it.” This is the point Robert expressed to illustrate that the methodology and implementation to addressing the homeless has to and is currently changing in Arcadia. In 2015-16 the APD developed the “Homeless Education & Liaison Program (HELP Team). The mission of the program is, “to improve the quality of life in the City of Arcadia by reaching out to the homeless community and providing information, resources, and motivation with the ultimate goal of finding an alternative to life on the streets.” Being in service as an officer entails the commitment towards helping all aspects of the community.

Robert ended his presentation by notifying those in attendance on how they can assist the Arcadia Police Department. The business owners and private property owners in the community can make a positive impact by notifying the APD of habitual offenders. As well Robert’s team distributed applications for businesses to give their consent to address issues with the homeless on their property when the owner cannot be reached. The application is issued for 90 days and will expire after that time period.

Maile Plan representing Congresswoman Judy Chu reported that the Congresswoman has made the Opiod Crisis her number one concern. She also has introduced legislation on healthy living and the operation of shelters. On June 30, 2018 she will be hosting a veterans forum to engage with bets and make sure their case work is being heard.

Adam Hsu representing Assemblymember Ed Chau reported that the Assemblymember introduced 4 new bills. 1. AB 0111 – theft of items, this bill aggregates the cost of the item, labor, and damage as well if theft were to reoccur than those totals would be added. 2. AB 2058 – Cannabis influence on Driver, this bill tabulates data on the effect of cannabis in relation to drivers and further legislation will result from this. 3. AB 1859 – Data Breach, deals with data breach and making customers and clients aware of when their information has been compromised. 4. AB 2511 – Parents social media and child protection, this bill will create better age verification.

Sandra Montevilla representing Supervisor Kathryn Barger reported that they have a pilot program for mobile shower units, and their initiative would offer shower units every Wednesday from 11:00 AM to 3:00 PM. The Live Oak refurbishment project is continuing.

Mayor Peter Amundson reported that the city had a very divisive election and dedicated his prayers to unity for the city.

Tim Schwehr, Economic Analyst of the City of Arcadia, the city is currently accepting applications for boards and commissions, if you are a resident of Arcadia you can apply to be a part of the planning commission. The Arcadia Public Library has recently started offering a passport service.

Linda Sells and Joan Schmidt of the MAD Town Council reported that the next meeting for MAD is on May 16 at 7:00 PM at Annunciation Church.

Still Time to Donate to Foundation for Living Beauty
December 3, 2020

Congrats to the New Arcadia Board from Arcadia Chinese Association
December 2, 2020