Mt. Lowe Brewing Co., which draws inspiration from the lofty peaks of the San Gabriels, will offer longtime fans and new friends alike a unique evening of craft beer enjoyment and plenty of good fun as part of Dine Arcadia. 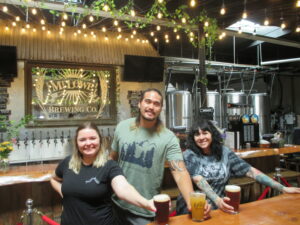 Mt. Lowe Brewing Co. Manager Christian Kama, with Sarah Wooster, left, and Lenise Albarran, serve up a sampling of the brewmasters’ art at the popular tavern in North Arcadia.

For North Arcadians, it hardly seems possible that the popular spot has been around not even five years; it occupies its warehouse – formerly an auto restoration shop – so comfortably that it seems it’s been there since … well, since the original Ye Alpine Tavern was still serving frosty mugs for thirsty travelers above Altadena on the slopes of the real Mt. Lowe 85 years ago.

“We opened in December of 2016 and we’ve been fortunate to be so successful,” said assistant manager and brewer Joey Rodriguez. “We’re happy the way the community has embraced us.”

He said the founders and brewmasters Shawn Nemanich and Mike Reiling drew on the landmark peak above Altadena to summon the heritage of the Foothill communities and their breathtaking mountainous backdrop.

“We drew on the history of the area, its natural setting. They give us this great, outdoorsy feel,” Rodriguez said.

That certainly brings to mind the line from the old beer commercial you can find on YouTube: “From the land of pines, lofty balsams.” But of course, Mt. Lowe is vastly superior.

The mission is to offer guests, as Rodriguez put it, “a home away from home where everybody knows your name.”

Customers gather in its spacious beer hall under the gleaming stainless steel aging tanks, or out in the wide open spaces of the back patio, where a rotating lineup of food trucks dispense meals and appetizers almost any time the pub is open.

The 1,000-barrel-a-year brewery has already made an indelible mark on its neighborhood: it has won awards for its Honeyngton Hef wheat beer and Glitter AF light raspberry ale; its products are on draft at a number of local taverns depending on the season; and its brews are available in cans at selected retail locations.

Rodridguez said the Dine Arcadia tasting event, which will be presented as a private party in the outdoor setting, will offer guests a special selection of new and specialty brews along with a variety of the pub’s most popular beers.

Mt. Lowe Brewing Co. has won a loyal following with creations such as its signature Bungalow Blonde American ale, Hills Have Eyes western IPA, Lowe Down eastern IPA and a true original, the Tears of 1,000 Apricots sour gose that indeed captures the deliciousness of the tangy fruit.

The house mixologists have also concocted a menu of beer cocktails such as the Beermosa (orange juice, of course), Lemon Radler (Alpine Lager and lemonade), Milk Stout Float (with a scoop of vanilla) among others.